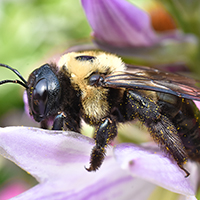 Carpenter bees (the genus Xylocopa in the subfamily Xylocopinae) are large, hairy bees distributed worldwide. There are some 500 species of carpenter bee in subgenera. Their name comes from the fact that nearly all species build their nests in burrows in dead wood, bamboo, or structural timbers (except those in the subgenus Proxylocopa, which nest in the ground). Members of the related tribe Ceratinini are sometimes referred to as “small carpenter bees”.

In the United States, there are two eastern species, Xylocopa virginica, and Xylocopa micans, and three other species that are primarily western in distribution, one being Xylocopa varipuncta. X. virginica is by far the more widely distributed species. Some are often mistaken for a bumblebee species, as they can be similar in size and coloration, though most carpenter bees have a shiny abdomen, while in bumblebees the abdomen is completely clothed with dense hair. Males of some species have a white or yellow face, where the females do not; males also often have much larger eyes than the females, which relates to their mating behavior. Male bees are often seen hovering near nests, and will approach nearby animals. However, males are harmless since they do not have a stinger. Female bees do have a stinger, but are not aggressive, and will not sting unless directly provoked. 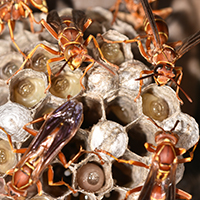 A wasp is a predatory flying stinging insect of the order Hymenoptera and suborder Apocrita that is neither a bee nor an ant. A narrower and simpler but popular definition of the term wasp is any member of the aculeate family Vespidae. Wasps are critically important in natural biocontrol as almost every pest insect species has at least one wasp species that is a predator upon it. Parasitic wasps are increasingly used in agricultural pest control as they have little impact on crops.

Characteristics: The following characteristics are present in most wasps: two pairs of wings (except wingless or brachypterous forms in all female Mutillidae, Bradynobaenidae, many male Agaonidae, many female Ichneumonidae, Braconidae, Tiphiidae, Scelionidae, Rhopalosomatidae, Eupelmidae, and various other families). An ovipositor, or stinger (which is only present in females because it derives from the ovipositor, a female sex organ). Few or no thickened hairs (in contrast to bees); except Mutillidae, Bradynobaenidae, Scoliidae. Nearly all wasps are terrestrial; only a few specialized parasitic groups are aquatic. Predators or parasitoids, mostly on other terrestrial insects; most species of Pompilidae (e.g. tarantula hawks), specialize in using spiders as prey, and various parasitic wasps use spiders or other arachnids as reproductive hosts. 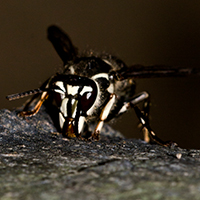 Dolichovespula maculata is a North American insect which, despite commonly being called the bald-faced hornet (or white-faced hornet), is not a true hornet at all. It belongs to a genus of wasps called yellow jackets in North America, and is more distantly related to true hornets like the Asian giant hornet or European hornet, but the term “hornet” is often used colloquially to refer to any vespine with an exposed aerial nest.

The bald-faced hornet lives throughout North America, including southern Canada, the Rocky Mountains, the western coast of the United States, and most of the eastern US. They are most common in the southeastern United States. They are best known for their large football-shaped paper nest, which they build in the spring for raising their young. These nests can sometimes reach 3 feet tall. Like the median wasp Dolichovespula media in Europe, bald-faced hornets are extremely protective of their nests and will sting repeatedly if disturbed.

Every year young queens that were born and fertilized the previous year start a new colony and raise their young. The workers expand the nest by chewing up wood that mixes with a starch in their saliva, which they spread with their mandibles and legs to dry into paper. The workers also guard the nest and collect nectar and arthropods to feed the larvae. This continues through summer and into fall. As winter approaches, the wasps die, except for young fertilized queens which hibernate underground or in hollow trees. The nest is generally abandoned by winter, and will most likely not be reused. When spring arrives the young queens emerge, and the cycle begins again.

Cicada killer wasps (the genus Sphecius) are large, solitary, ground dwelling, predatory wasps. They are so named because they hunt cicadas and provision their nests with them, after stinging and paralyzing them. There are some 20 species worldwide. The highest diversity occurs in the region between North Africa and Central Asia.

In North America, the term “cicada killer wasp” usually refers to the most well-known species, the Eastern cicada killer (S. speciosus). There are also a few other related genera sometimes referred to as “cicada killers”, e.g. Liogorytes in South America and Exeirus in Australia.

The use of cicadas as prey is in keeping with the typical behavior of the tribe Gorytini, which tend to specialize on various members of the Cicadomorpha as prey items. 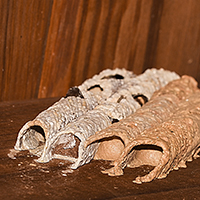 Mud daubers are long, slender wasps, the latter two species above with thread-like waists. The name of this wasp group comes from the nests that are made by the females, which consist of mud molded into place by the wasp’s mandibles.

The organ-pipe mud dauber, as the name implies, builds nests in the shape of a cylindrical tube resembling an organ pipe or pan flute.

The black and yellow mud dauber’s nest is composed of a series of cylindrical cells that are plastered over to form a smooth nest about the size of a lemon.

The metallic-blue mud dauber foregoes building a nest altogether and simply uses the abandoned nests of the other two species and preys primarily on black widow spiders. 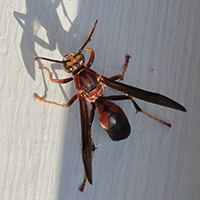 Paper wasps are 3/4 inch to 1 inch (2-2.5 cm)-long wasps that gather fibers from dead wood and plant stems, which they mix with saliva, and use to construct water-resistant nests made of gray or brown papery material. Paper wasps are also sometimes called umbrella wasps, due to the distinctive design of their nests or other regional variants such as Trinidad & Tobago’s use of Jack Spaniard.

The name “paper wasps” typically refers to members of the vespid subfamily Polistinae, though it often colloquially includes members of the subfamilies Vespinae (hornets and yellowjackets) and Stenogastrinae, which also make nests out of paper. Twenty-two species of Polistes paper wasps have been identified in North America and approximately 300 species have been identified worldwide. The Old World tribe Ropalidiini contains another 300 species, and the Neotropical tribes Epiponini and Mischocyttarini each contain over 250 more, so the total number of true paper wasps worldwide is about 1100 species, nearly half of which can be found in the Neotropics.

The nests of most true paper wasps are characterized by having open combs with cells for brood rearing, and a petiole, or constricted stalk, that anchors the nest (see image, right). Paper wasps secrete a material which repels ants, which they spread around the base of the anchor to prevent the loss of eggs or brood.

Most social wasps of the family Vespidae make nests from paper; although some stenogastrine species, such as Liostenogaster flavolineata, use mud. A small group of eusocial crabronid wasps, of the genus Microstigmus (the only eusocial wasps outside the family Vespidae), also construct nests out of chewed plant fibers, though the nest consistency is quite different from those of true paper wasps, due to the absence of wood fibers, and the use of silk to bind the fibers.

Unlike yellowjackets and hornets, which can be very defensive, polistine paper wasps will generally only attack if the nest is threatened. Since their territoriality can lead to attacks on people, and because their stings are quite painful and can produce a potentially fatal anaphylactic reaction in some individuals, nests in human-inhabited areas may present an unacceptable hazard. 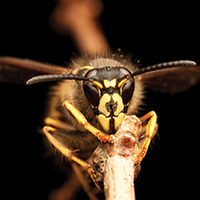 Life Cycle: In spring, mated female constructs small nest and daily brings food to larvae until 1st brood matures and females serve as workers, extending nest and tending young. In late summer, males develop from unfertilized eggs and mate. When cold weather begins, all die except mated females, which over winter among litter and in soil.

Warning: Workers will sting repeatedly if they perceive you as a threat to their nest, otherwise, they are less aggressive.

Habitat: Meadows and edges of forested land, usually nesting in ground or at ground level in stumps and fallen logs.

Range: Throughout North America; various species more localized. Yellow jackets can be pests at picnics, and they will carry off bits of food. If the nest can be found and its opening covered at night with a transparent bowl set firmly into the ground, adults will be confused by their inability to escape and seek food in daylight; they will not dig a new escape hole and will soon starve to death. The Western Yellow Jacket (V. Pennsylvania) and Eastern Yellow Jacket (V. maculifrons) are similarly colored, except the first antennal segment of the latter is all black. 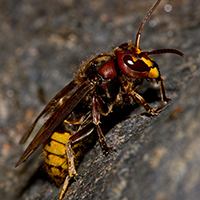 Hornets are the largest eusocial wasps, that reach up to 45 millimeters (1.8 inches) in length. The true hornets make up the genus Vespa, and are distinguished from other vespines by the width of the vertex (part of the head behind the eyes), which is proportionally larger in Vespa; and by the anteriorly rounded gasters (the section of the abdomen behind the wasp waist).

A hornet’s sting is painful to humans, but the sting toxicity varies greatly by hornet species. Some deliver just a typical insect sting, while others are among the most venomous known insects. Allergic reactions, fatal in severe cases, can occur.  An individual suffering from anaphylactic shock may die unless treated immediately via epinephrine (“adrenaline”) injection using a device such as an EpiPen, with prompt followup treatment in a hospital.