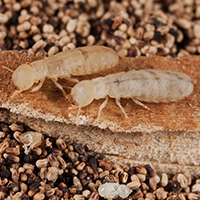 Characteristics – Size: Soldiers measure 3/8-inch in length; male and female reproductives grow to 1/2-inch long. During the winged stage there are four equal size wings that extend longer than the body by 1/8- to 1/4-inch. Color: Usually pale brown.

Termites have soft bodies and are cylindrical in shape. They have six legs, compound eyes and chewing mandibles.

Behavior: Drywood termites are social insects that live in colonies. The colonies are composed of kings, queens and soldiers. There is no worker caste as in subterranean colonies. The work is performed by immature termites before they become adults. King and queen termites perform the reproductive functions of the colony. They are light to dark brown and 1/3- to 1 inch in length. Soldiers guard the colony against invaders such as ants. They are white and wingless with large brownish heads and jaws. The nymphs (immatures), which are the most numerous caste, are white and wingless. The soldiers and immatures remain inside the wood at all times.

Habitat: Drywood termites infest only dry wood and are most often found in attic wood structure as they do not require contact with the soil. They need very little moisture because they are able to live off of the water produced from the digestion of the cellulose. Drywood termites mate and fly to new dry wood areas, enter a small hole in the wood, and start to form a colony. Colonies will contain up to 2500 members.

Tips for Control: There are some things a property owner can do to help prevent drywood termite infestation.

Store firewood and lumber away from the house. Use 20-mesh screen on all windows and doors, and especially at ventilation openings for attics and crawl spaces. Exposed wood that is sealed with a uniform coating of paint, varnish or other sealant will help prevent easy access by drywood termites. Be sure to seal nail holes and cracks. And most importantly, do not hesitate to call a professional for proper termite inspection.  Follow these tips to help protect your home and family. 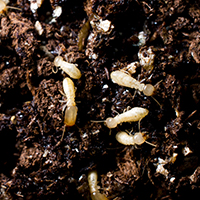 Behavior: This termite is known to swarm in May and June, but small flights can occur at any time of the year. Swarming is the primary way the termite naturally spreads after it has been transported to a new area. Three elements are needed for swarming to be effective: 1) Proper food resources (cellulose and wood), 2) moisture, and 3) a physical niche. As the colony grows, specialized castes are produced for the different tasks required. The first caste produced is the workers. The second caste is the soldiers. The third caste is the reproductives. Two types, primary and supplementary, are produced in a Formosan subterranean termite colony. The two types have different functions. Primary reproductives swarm and start new colonies. They are called alates or swarmers. Although thousands of primary reproductives are produced each year, they all leave the nest. Primaries cannot become reproductive if they remain in their colony of origin. In a Formosan colony, the only primaries that reproduce are the original king and queen that started the colony. Supplementary reproductives, on the other hand, can become reproductive only in the colonies in which they were born. They take over reproduction when the primary king or queen dies or becomes separated from the main colony.

Habitat: Subterranean termites live in colonies in the ground, building vertical tunnels that look like mud tubes above ground level so that they can search for food. Because subterranean termites will die if exposed to air for an extended period of time, the tunnels provide protection from the open air, allowing workers to carry food to the nest. Subterranean termites can form tunnels through cracks in concrete, so slab homes are not exempt from these termites. They need to stay in contact with the soil in order to survive, unlike drywood termites that only need low moisture.

Tips for Control: There are several things a homeowner can do which can help prevent termite infestations or make them easier to detect.

Store firewood away from the house. Make sure at least four inches of the foundation can be seen all around the home. Siding should not extend into the soil. Mulch and soil should not be high enough to cover the siding. Make sure water drains away from the foundation. Accumulation of water next to the foundation is important for the survival of a termite colony next to a home. Rain gutters are ideal; however, the downspout should direct the water away from the home. Roof or plumbing leaks can allow termites to survive above ground in a house. These should be corrected as soon as possible. Paint will protect exposed wood against termites for about five years, and commercial pressure-treated wood will provide longer lasting protection. Before painting, all cracks and crevices should be filled with putty or plastic wood.

Certain woods are naturally resistant to termite attacks. Among these woods are redwood core, bald-cypress, mahogany, and Spanish cedar. These types of wood, however, will become susceptible after several years of exposure to weather.