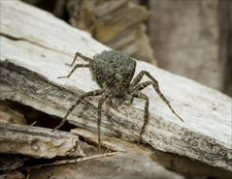 Wolf spiders are hunting spiders and will chase their prey. These spiders are often big and hairy which alarms some people, but they are primarily nuisance pests. Over 100 species occur in the United States and Canada.

Wolf spiders actively hunt during the night and sometimes during the day. They are fast on their feet and pursue prey. Because of these habits, they are commonly seen by people.

Wolf spiders may enter structures in search of prey. Although they are not inclined to be permanent residents in structures, once inside, they often stay. Inside they tend to stay at or near floor level, especially along walls under furniture and other objects. Wolf spiders may be brought indoors with firewood. Outside they can be found under stones, landscape timbers, firewood, under decks in leaf litter, etc. They often rest in such sheltered places during the day.

Because wolf spiders feed on a variety of insects, including crop pests, they can be beneficial. Wolf spiders can bite, but it’s extremely rare to experience a wolf spider bite unprovoked. They will only bite if they are handled. The presence of wolf spiders in homes is usually accidental.