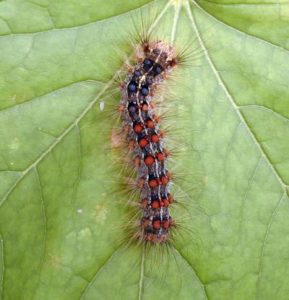 One of the pests that causes the most damage to plants and leaves are ravenous caterpillars. Every year at the beginning of summer they make their eating debut and don’t seem to stop all season. You have probably noticed that the plants in your garden look great during the spring and then all of a sudden the leaves are starting to be eaten away. This could be caused by many pests but caterpillars are one of the worst offenders. They eat all day long and will feed on just about any kind of leaf. One moth that has made a huge impact and runs rampant in some areas such as Sturbridge and Worcester Massachusetts is the Gypsy Moth Caterpillar.

An interesting fact about the gypsy moth caterpillar is that people say they sound like rain. That’s right, rain. When a colony of these caterpillars is in the trees feeding on leaves, they defecate which, if there is a large amount of caterpillars, can sound exactly like rain falling down through the trees.

The gypsy moth caterpillar are a hairy brown or black and look like a creepy menace. They usually come out some time in May but this year the cooler weather has delayed their release until a little later in June. The moth was brought to the United States in 1869 in an attempt to start a silkworm colony. When the experiment failed the caterpillars started to make their way into the states and that’s when people started to notice the plants were being devoured. The gypsy moths name is fitting since they tend to move around to find food.Each of the females can lay up to 300 eggs so an infestation in one area can become substantial.

The new moths that are born, enter the world and soon leave a strand of silk that is used to travel through the leaves to look for the best place to feed. The problem comes when they start to feed in large groups and can cause defoliation. One way that these caterpillars can be controlled is by a fungus that is activated by moisture and can be deadly to the larvae. The area that is being attacked can be sprayed to eliminate the larvae and the caterpillars alike. If you suspect a problem with these leaf eating machines call Dave’s Pest Control. We will perform a thorough inspection and destroy any egg masses found on tree trunks, decks, vehicles and outdoor furniture etc in your yard.