The hobo spider is a member of the genus of spiders known colloquially as funnel web spiders, but not to be confused with the Australian funnel-web spider. It is one of a small number of spiders whose bites are generally considered to be medically significant. This species of spider has a reputation for aggressiveness, due to its poor eyesight. 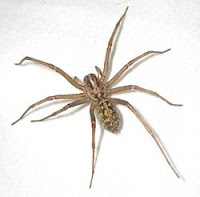 Hobo spiders construct a funnel-shaped structure of silk sheeting and lie in wait at the small end of the funnel for prey insects to blunder onto their webs. Hobo spiders sometimes build their webs in or around human habitations.  They will normally avoid contact with humans unless accidentally crushed or squeezed. The spider’s venom is strong enough to cause considerable local pain and, possibly, necrosis.

The hobo spider is found throughout the Pacific Northwest and can be identified by its distinct pattern of yellow markings on its abdomen. These spiders build their webs in holes, cracks and recesses, and like most spiders, can be found in hiding places such as window wells and stacks of firewood, storage items, behind furniture and in closets.

As hobo spiders are much more likely to attack if provoked or threatened, people who live in areas where this spider is found should be aware of their habits to prevent and detect infestations before they become a problem.  Unlike the other spiders profiled here, the bite of a hobo spider may go unnoticed at first, but then a moderate to severe, slow-healing wound will develop.