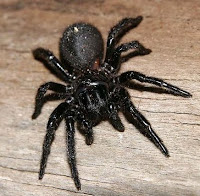 Did you know that spiders have modified fangs that inject venom? Most spiders will only bite humans in self-defense, and few produce worse effects than a mosquito bite or bee-sting. Most of those with medically serious bites, such as recluse spiders and widow spiders, are shy and bite only when they feel threatened, although this can easily arise by accident. Funnel web spiders’ defensive tactics are aggressive, although they rarely inject much venom. On the other hand the Brazilian wandering spider requires very little provocation.

Many alleged cases of spider bites may represent incorrect diagnoses, which would make it more difficult to check the effectiveness of treatments for genuine bites. While the venom of a few species is dangerous to humans, scientists are now researching the use of spider venoms in medicine and as non-polluting pesticides.

If you are concerned about the spiders in your home, give Dave a call at 1-800-400-6009. We’ll be glad to talk with you and offer a safe and affordable solution. Dave’s Pest Control: https://davespestcontrol.net