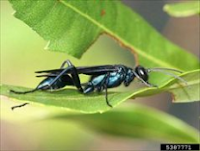 This group of wasps gets its common name from the fact that they construct their nest of mud. Mud daubers are found throughout the United States.

Mud daubers are solitary wasps. They are not social and do not live in colonies. Mud daubers provision spiders for their larvae by paralyzing them with their venom and bringing them into their nests.

Mud daubers do not defend their nests and only rarely sting. They are typically considered nuisance pests, and are actually beneficial as they help control spiders. Although mud daubers are not typically dangerous, their nests should be removed by a pest management professional if found on your property, as their abandoned nests are often adopted by other more dangerous wasp species.