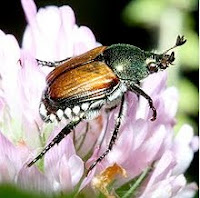 As the name suggests, the Japanese beetle is native to Japan. The insect was first found in the United States in 1916 in a nursery near Riverton, New Jersey. It is thought that beetle larvae entered the United States in a shipment of iris bulbs prior to 1912 when inspections of commodities entering the country began.

During the larval stage, the Japanese beetle lives in lawns and other grasslands, where it eats the roots of grass. During that stage, it is susceptible to a fatal disease called milky spore disease, caused by a bacterium called milky spore.