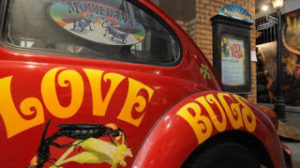 Did you know that New Orleans is home to the largest bug museum in the United States?

Operated by a local non-profit named the Audubon Nature Institute, the self-described “largest freestanding bug museum in the United States” is “a shrine to insects,” according to its president and CEO, Ron Forman. The bugseum features numerous hands-on exhibits and “loud, wacky edutainment displays,” thus living up to its tagline: “You’ll be infested with fun.”

Highlights include an over-sized “den” where you are shrunk to the size of a bug and are threatened by a bird and a trapdoor spider; an “immersion theater” where things pop out at you and mist sprays in your face; a replica swamp and an indoor butterfly garden.

Ron Forman calls New Orleans “the ideal place” for a bug museum. Insects have shaped much of the history of the city, from the cockroaches to the termites to the malaria epidemics.”