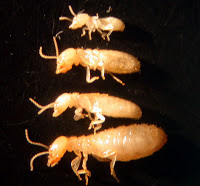 Most people think that termites just eat wood, but in reality they actually eat the plant cellulose that is found in the wood. This is a significant difference, because many termites will eat other forms of plant material as well. Termites are actually grouped according to their feeding behaviors, and of the six types of termites there are actually only two which are generally responsible for the damage that are caused to houses and other man-made structures. While there are termites which feed off of cellulose in the soil, as well as termites which eat grass, living woods, and occasionally even certain types of fungus, the majority of the termites that people encounter are those that build subterranean colonies and those which eat dry wood.

Of course, just as important to the termites’ diet as cellulose is water. Feeding Termites require water every few hours in order to stay alive, which is why termites can be seen swarming near the surface of the ground at times as the workers collect both food and water to bring back to other termites within the colony. It’s important to note that it’s only the workers of the colony which will gather resources for the rest of the termites within; Breeding Termites and the colony’s soldiers will die if they don’t have a steady supply of food and water gathered by workers, as they won’t go off in search of food for themselves.

If you’re concerned about termites around your home or place of business, give Dave’s Pest Control a call at 1-800-400-6009.