The brown recluse spider, also called,the ‘fiddleback spider’ or ‘violin spider’ due to the dark violin shape on its head. They are nocturnal and eat other bugs like cockroaches and crickets. Males wander farther than females and will crawl into shoes or other clothing. Brown recluse spiders often live outdoors in debris and wood piles and can be found indoors in storage areas and dark recesses. 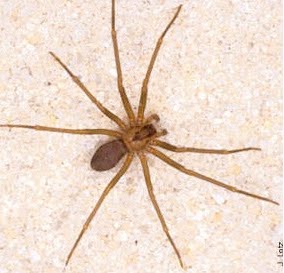 The brown recluse spider bites in defense and does not bite humans instinctively. They will bite humans when the clothing they are hiding in is worn. They have a bit of a bad rap because their bite can produce an open, ulcerating sore and cause severe tissue necrosis at the bite site. Brown recluse spider bites often go unnoticed initially because they are usually painless bites, producing minor burning that feels like a bee sting. Symptoms usually develop two to eight hours after a bite; you may experience severe pain at the bite site after about four hours, as well as severe itching, nausea, vomiting, fever, and muscle pain

If you think you have been bitten by a brown recluse spider, see a doctor immediately. If possible, bring the spider to the doctor’s office for proper identification of the spider is very helpful in making the correct diagnosis. If you are unable to be seen by a doctor that day, go to a hospital emergency room.

To avoid brown recluse spiders, keeping clothing off of the floor. Store clothing and shoes inside plastic containers, and shake out all clothing that has been in a hamper before wearing or washing.