The news media may have been nearly obsessive in its coverage of bed bugs this year, but when it comes to insect nuisances, the stink bug is giving bed bugs a run for the money. 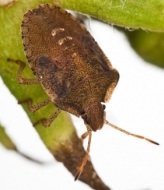 The brown marmorated stink bugs, although native to Asia, are increasing in number, particularly in the Middle Atlantic states, damaging fruit and vegetable crops. And while they don’t bite, they so gross people out. They drop from doorways, can creep into virtually any space, and make the mistake of crushing one…and you’ll think you’ve run over a skunk.

First found in Allentown, PA in 199, the stink bug seemingly has no natural enemies here. Researchers are working earnestly to understand why the bugs reproduced at a faster rate this year, and come up with a way to protect vegetable and fruit crops from this invader.